There are two species of gorillas (Eastern and Western Gorillas), each having two subspecies in 9 African countries (See table below). The map after the figure will give you an idea where these subspecies are found. 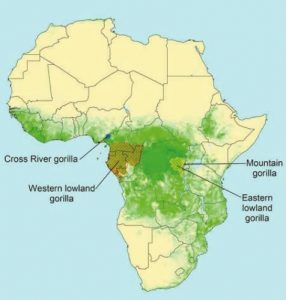 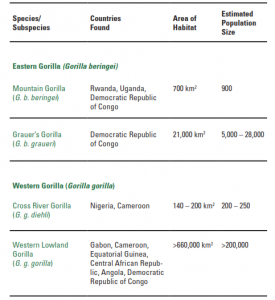 In this article, we shall talk about the eastern lowland gorilla (also known as Grauer’s gorilla). The eastern lowland gorilla is the largest of the four gorilla subspecies. It is distinguished from other gorillas by its stocky body, large hands and short muzzle. Males can weigh upto 250 kilograms (551lb) and can reach two meters tall when standing. Just like other gorilla subspecies, eastern lowland gorillas are largely herbivorous and eat a wide range of plants, fruits, seeds, leaves, stems and barks as well as ants, termites and other insects. A recent report by scientists documented a shocking 77% drop in Grauer’s gorilla numbers, from an estimated 17,000 in 1995 to just 3,800 individuals in 2016. The civil unrest that the DRC has seen over the last decade has also affected the national park’s infrastructure where these gorillas live and the rangers’ ability to monitor the gorillas on a daily basis. In the last 50 years, its range has decreased from 8,100 square miles—about the size of the state of Massachusetts— to about 4,600 square miles today. This subspecies may now occupy less than 13% of its historical range. Throughout the unrest, the gorillas have been vulnerable to poaching as rebels and poachers invaded the park and people set up illegal mines. Additionally these endangered gorillas are threatened by habitat loss from illegal logging, agriculture and illegal settlements, wildlife trade of mainly baby gorillas and mining for coltan, cassiterite and gold.

There are currently two families out the 9 Families of is available Lowland Gorilla for tracking in Kahuzi-Biega National Park. The Lowland Gorilla Trekking is like Mountain Gorilla trekking, so don’t miss the unforgettable experience of watching the primates in the Jungle.

Just before the entrance to the park is the Tshivanga Visitor Centre where you will be briefed and guided by the park staff. In summary, the process, rules, regulations are very similar to the Mountain Gorilla tracking. Please, do not forget; Sturdy boots or shoes for walking in the forest, long pants to wear when hiking, rain Jacket, water, camera (no flash photography allowed) and snacks or a picnic lunch.