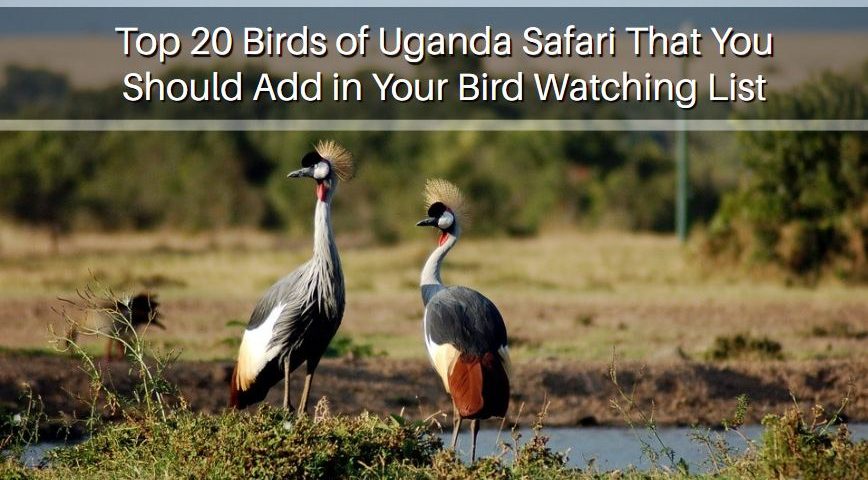 “In order to see birds, it is necessary to become part of the silence”.

If you are a bird lover and looking for a tranquil corner in the earth that only vibrates with the son of birds, then you must visit Uganda. Known as the pearl of Africa, Uganda is one of the prime destinations of the continent for bird watching.

While panning for Uganda Safaris, be sure you will go to meet some iconic bird species in the country. If you are an avid bird lover, then go for Bird Watching in Uganda in your next vacations.

This premier bird-watching site offers more than 1000 species of birds. Here are 20 iconic birds to meet in Uganda

Shoebill bird is endemic to Africa only. The bird attracts flocks of bird lovers to visit Uganda to take a glimpse of it. The bird got its name due to its large bill that looks like a shape of shoe. That’s why the bird is called a Shoebill bird.

Here are a few interesting facts about Shoebill;

The only spot to meet these tiny green birds during your Uganda Tours is the Bwindi National Park. They are tiny yet in the form of the most beautiful natural color. This small elusive bird is a small species in the broadbill family.

Here are a few interesting facts about Green broadbill;

This is one of the birds of Uganda that is the most difficult to spot. Mostly they can be spotted in the lives well-camouflaged area of Kibale national park in Uganda. June to August is the best time to spot them and prefer to find them in the morning time.

Here are a few interesting features about them;

Native Africans believe that these birds bring good luck to their lives. It is one of the common birds and can be spotted in various national parks in Uganda. This is also one of the most beautiful birds in Uganda.

Here are a few interesting facts about Blue Turaco;

This is one of the vulnerable bird species found in Uganda. Apart from Uganda, you can found them in Burundi, the eastern Democratic Republic of the Congo, and Rwanda. They usually inhabit in the closed moist understory in the montane forest. These birds are shy, elusive, seldom seen. They get disturbed they fly immediately.

This bird is nocturnal and belongs to the nightjar family. It can only be found on the African continent. The adult male Standard-winged Nightjar has unusual ornamented wings. The bird has two broad central flight feathers on both wings that can be spotted. These are long up to 38 centimetres and are much longer than its body. They eat insects in flight.

These bird species are the primary birds of Uganda. Also, the camouflaged species can be spotted in the Democratic Republic of Congo and Rwanda too. This species belongs to the Cettiidae family. They usually live in tropical moist montane forests. These are usually small birds of 10–11 cm and 11.3 g weight.

This is a pretty and colorful bird that belongs to the Malaconotidae family. They used to live in north-central Africa. These birds have striking colors and are medium-sized with a bright red forehead and throat. With black breast band, lemon-yellow belly, and black tail the bird’s looks stunning.

While visiting Uganda you will meet many bird species and Bar-tailed trogon is undoubtedly one of them. These almost motionless birds can be spotted sitting high in the canopy. You can find them mostly in Bwindi national park in Uganda.

These birds’ species belong to the Lybiidae family. The Black-breasted Barbet is losing its numbers rapidly due to the removal of dead trees as these are the nesting area of these birds.

Here are a few interesting facts;

It is a species of leaf warbler in the family Phylloscopus. It is also closely related to yellow-throated woodland warbler and Laura’s woodland warbler. There are 2 subspecies can be spotted; P. l. Laetus and P. l. Schoutedeni. P. l. Laetus is mostly spotted in Western Uganda and eastern Democratic Republic of the Congo you can also spot them in SW Uganda, western Rwanda and western Burundi.

P. l. Schoutedeni can be spotted only in Mt Kabobo in eastern DRC. These species of bird’s natural habitat is on bamboo highland forest between 1200–3100 m.

These are one of the largest terrestrial forest birds. They grow up to 35cm long and have reddish-brown plumage. They have a redhead, red bills and legs, brown iris, as well as red orbital skin that make them different. Both genders look almost similar. The only difference is that the female is a bit smaller than the male.

They are found in the Southwest of Uganda. Apart from Uganda, you can spot them in mountain forests of the eastern Democratic Republic of the Congo, and borders between Burundi and Rwanda.

The mountain masked Apalis belongs to the Cisticolidae family. Apart from Uganda, the birds can be spotted in Burundi, Democratic Republic of the Congo, and Rwanda. The bird was first spotted in 1902.

Archer’s Robin-Chat is also known as Archer’s round-robin. This is a species of Muscicapidae family. The bird is endemic to a few African countries. Apart from Uganda, you can find them in Burundi, Democratic Republic of the Congo, and Rwanda. They are not risky species and you can spot a lot of them in the national parks of Uganda.

The common name of Grauer’s Warbler is Grauer’s Forest Warbler. It can be commonly spotted in East African Safari like Uganda, Rwanda, etc.…

These birds are usually 14 cm long and weigh up to 18 gm. Grauer’s warblers are the greenish body and greyish head. Warbler produces a gentle “hrrrrrrrr” sound.

Mostly for breeding these species migrates to Uganda Destinations. So, you can easily spot them during Uganda Safari.

Dusky Crimsonwing or CryptospizaJacksoni is a small 11 cm bird with a total weight of 14 gm. The best thing is their body formation, their heads are read and grey and tail crimson red or blackish-grey.

Their voice is too soft, it sounds like “tzeek” or “tsit” and when angry then it produces a thrilling sound “geegeegeegee”.

These bird species mostly depends on grass seeds, beetles, and snails. If you observe them during Bird Watching in Uganda then you can notice that they seem similar to sparrows.

Crested Crane is also called Balearica Regulorum Gibbericeps. It is the national bird of Uganda, so you can easily know how they seem to be.

The best thing is that they weigh up to 7 pounds, having a height of 3 feet and can survive till 22 years. These species seem quite similar to the cranes but having a yellowish hair-like feather over the head.

Another fact about these species is they are smart enough to protect themselves.

Nectarinia purpureiventris is another name of purple breasted sunbird. These bird species can be easily spotted at the south-western corner of Uganda.

Generally, these birds are quite bigger than others, an adult male length up-to 22 cm whereas the female is just 14 cm.

Regal Sunbird or Nectarinia Regia is a bird species that is commonly seen in Eastern African regions like Uganda, Congo, and Tanzania.

These bird species have been ranked under the least concern species, so the government is taking the step to protect them.

Mostly these birds depend on insects as well as they suck the nectar of the flowers. They have a sharp-pointed beak with a green head and a mixture of yellowish-red body.

A small sized 13 cm bird is Shelley Crimsonwing. These birds are also called as Cryptospiza Shelley and spotted near Uganda and Congo.

Shelley’s are good swimmers and produces a sound like “tit tittit”.

There are more than 300 species of birds that you can watch during Uganda Safari. But these 20 species that we have mentioned here are among the rare, and popular species.

Come with us to discover them all together in Uganda’s destination. We Saso Gorilla Safaris are one of the relevant brands, and mostly we focus on what you are interested in the view.