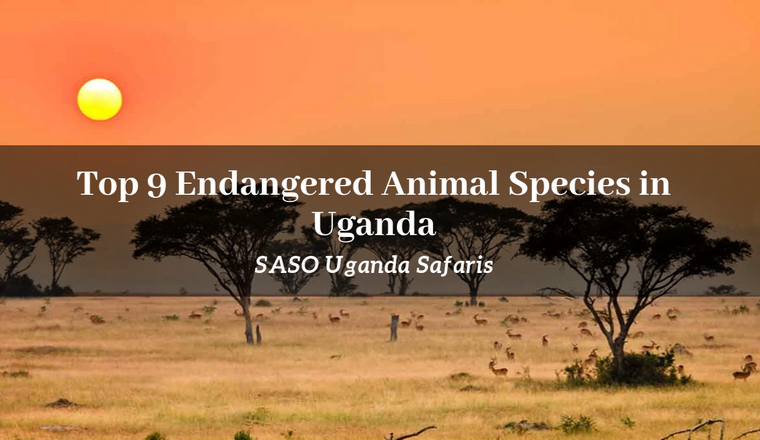 Uganda is one of the world’s top 10 most bio-diverse countries that hold many endangered flora and fauna species. The country truly deserves the title “pearl of Africa”. The landscape of the country is as mesmerizing as the wildlife it holds.

Every year 100,000 people pan especially to meet the Mountain Gorillas or the Chimpanzees. Apart from Mountain Gorilla and Chimpanzees, there are few more iconic species that are vanishing rapidly. There are many reasons for these animals reducing their numbers like deforestation, poaching, and climate change.

However, to save these animals and to encourage the Uganda Safaris; the govt. of Uganda is been adopting many methods. Here is a list of 9 endangered species that you should meet once before they vanish.

Mountain Gorillas are the most iconic attraction of Uganda Safaris; the prime reason for which most of the tourists book their ticket to Uganda. Inhabiting in the deep forest in Uganda’s volcanic mountain forests these are the giant species yet the harmless ones.

Having 98% human-like DNA these species are very playful and interesting to watch. Mountain Gorillas used to decrease heavily due to poaching and deforestation. However, the govt. of Uganda is trying to save them and as a result, the population has improved in recent few years. Considered as critically endangered by IUCN’s Red List, many programs are run to stop poaching.

Due to the illegal hunt by the poachers, the black and white Rhinoceros are in danger and unbelievably lost their numbers. Once widely roaming in Northern Uganda, black Rhinos are available in very few numbers. There are only 300 black Rhinos available in Uganda.

White Rhinos are the rarest and can be spotted only 80-100 in protected areas and the national park in Uganda.

The Ugandan Red Colobus Monkeys or the ashy red colobus is recognized as a distinct species since 2001. The red Colobus monkey is an old world monkey that can be spotted in 5 places in Uganda as well as Tanzania. The monkey’s population is been decreasing rapidly, a study says the Ugandan red colobus monkey population dropped 89 percent. These monkeys are in danger due to 2 reasons; they getting killed by both the poachers and the chimps residing in the country’s national parks.

One of the most iconic safaris that are in demand in Uganda is the Chimpanzee safari. With decreasing numbers of Chimps now Chimpanzee Safari Uganda is being more popular day by day. The country has only 5,000 chimps now in its national parks and reserve areas. These rare species are declining rapidly due to deforestation, getting hunted for meat and also mutilated by wire traps set for antelopes in the forests.

African Elephants are hugely reducing their number in recent years and Uganda is one of the countries that are reducing elephants too. However, the precautions are taken by the govt. of the country has been improving the situation a lot. Due to these trials, the number of elephants in Uganda has increased by 600%.

Interesting facts about the African Elephant:

Lions can be widely spotted in Queen Elizabeth national park; however, the numbers of these lions are decreasing thoroughly due to loss of forest and hunting. The lion population in Uganda has been decreased by 33% in the last 10 years. The govt. of the country is giving a lot of effort to save these endangered animals. As a result, DAVID SHEPHERD WILDLIFE FOUNDATION (DSWF) is funding a 2-year program that will dedicatedly search for the reason for reducing the lion numbers as well as how to save them.

Due to its nocturnal, solitary behavior and well-camouflaged coat, the striking leopards can be live in various vegetations. These stealth cats can be seen in Uganda National Parks. These species can be spotted in Kidepo Valley National Park, Murchison Falls Park, Queen Elizabeth Park, and Lake Mburo National Park. The main fact of their reducing numbers is the poaching for their beautiful fur coats and body parts for medicines.

Due to ongoing habitat fragmentation, conflict with human activities and infectious disease African wild dogs are vanishing very fast. They are the 2nd most endangered carnivores of Uganda and there is a total of less than 550 wild dogs roaming in African countries. Poaching is one of the prime reasons for these animals’ decreasing numbers.

These endangered species are truly spectacle attraction of Uganda, so plan for Uganda Safaris in your next holiday. Meet these vanishing species and learn more about how to restore these species. Make your plan with “SASO Uganda Safaris” to ensure meeting these iconic species at their best.