Few wildlife parks in the world can boast such a high biodiversity rating and with landscapes including savannah, bushland, wetlands and lush forests. 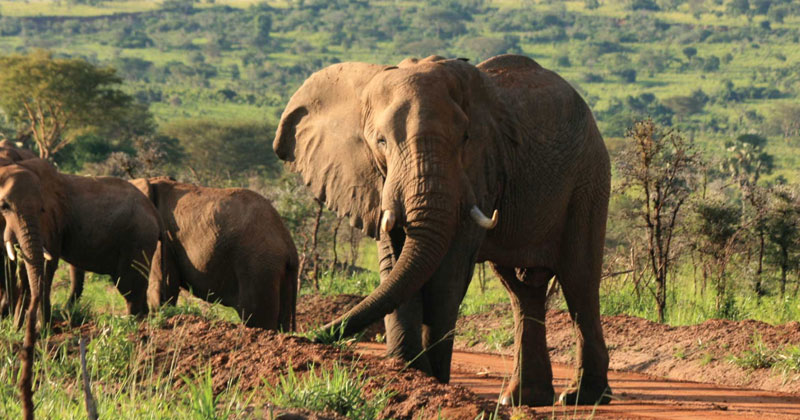 Murchison falls is a home to different wildlife species; over 76 mammal and 451 bird species including the Buffaloes, Jackson hartebeests, Antelopes, Lions, Kobs, Giraffes, Hyenas, Bushbucks, and Warthogs among others. They are widely spread all over the Savannah grasslands, grazing or hunting for prey. This makes the park’s landscape so amazing for game viewing/game driving.

Murchison Falls National Park is positioned in the Northwestern part of Uganda and covers an area of 3,840sq km, about 5-6hours drive from Kampala. It is the country’s oldest and largest national park and hence you can spot the Big 4, leaving out the Rhinos got extinct by 1983; good news is that they were re-introduced in Ziwa Rhino sanctuary by 2005. The park is also bisected by the renowned River Nile into two parts such as the Northern bank and the Southern bank and Game drives are best done the Northern bank since that’s where you can find a large concentration of wildlife in the Savannah plains whereas the Southern bank a lesser number of antelope herds and other few animals.

There is nothing as thrilling as watching predators such as lions make moves on their prey, it’s an amazing experience since most antelopes are hunted down and killed without noticing. All this is best observed during the dry season where the grass is short so game viewing is at its best. Game drives are an all year round activity though during the rainy season the grass is a bit tall hence give challenge especially during game viewing since some animals might be missed out.

There are different tracks followed while on a game drive such as; Albert, Victoria and Buligi tracks. Taking all these tracks while on the game drive gives you a totally different experience since each is endowed with various eco-systems. The Buligi is a 7km track north of Paraa and is among the most commonly used tracks for game viewing. Also areas like Nyamsika gorge is home to a big number of water animals which come to get water and Nyamsika cliffs have a higher concentration of buffaloes, lions as well as different birds like the Egyptian plover and the bee-eaters.

There is room for morning and evening game drives in the park. However game viewing can best be done in the morning from 6:30 am, and if at all you slept in a lodge at the southern bank, you are required to cross the river at the ferry at around 7:00am.

There is also another choice of going for an evening game drive that starts around 4:00pm local time and takes between 3 to 4hours.

All these Uganda safaris game drives can be done only on the Northern bank which is covered with savannah; hence tourists can view game very well. For a thorough game drive within the park approximately 5 hours can be enough. 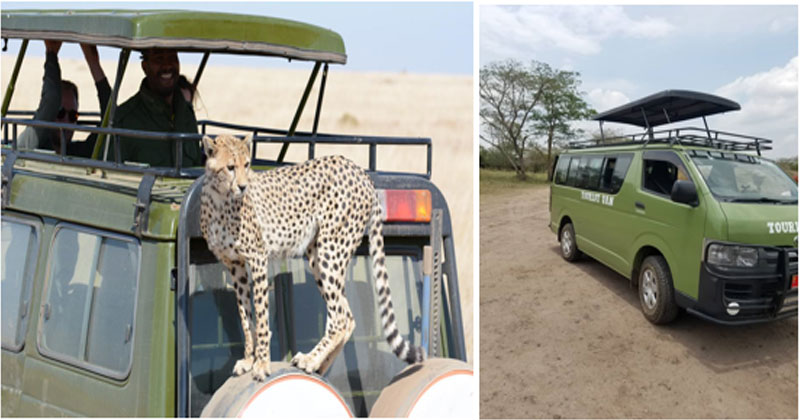 Different vehicles can be used, comfortable, spacious with a pop-up roof in order to view well wildlife and take clear photos. A 4X4 vehicle is advised; this can be a Van, small or an extended land cruiser. Also other cars can be used such as coasters for bigger groups, saloon cars among others. In the park one can do a self-drive though it’s important to have an armed park ranger guide with you. In addition, park rules are to be followed during game drives.

Game drives in Murchison falls national park live you with an unforgettable memories even when you are back home! 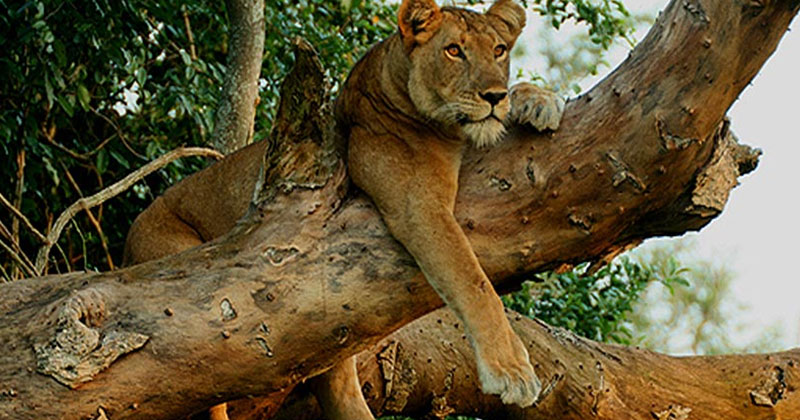 For a classic African safari experience, the tracks through Kasenyi, the North Kazinga Plains and the Ishasha Sector offer virtually guaranteed buffalo, antelope and elephant sightings, along with warthogs and baboons. Taking an experienced guide in the early morning or at dusk is the most successful way to track down a pride of lions, and maybe even the odd leopard

The open grasslands of Kasenyi provide QENP’s primary game viewing area, thanks to resident herds of Uganda kob and the lions that prey on them. The park’s experienced ranger guides can usually locate lions but predator sightings can be guaranteed by signing up for a tour with the Mweya-based Uganda Predator Project which monitors the movement of lions, leopards and hyaenas fitted with radio collars.

QENP’s southernmost sector offers a classic game viewing experience under vast rift valley skies. Expect to see buffaloes, hippos, elephants, topis and more besides. The chance of sighting lions is particularly good in Ishasha; the local prides obligingly spend their days resting up in the branches of shady fig trees. 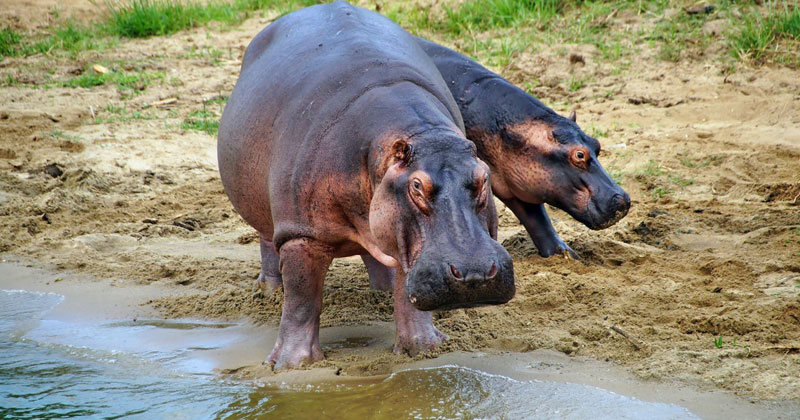 The network of game tracks in the east of the park passes a variety of landscape features including acacia woodland, wetlands, grassy hillsides, rock outcrops and seasonally flooded valley floors. Early morning and late afternoon are the best times to roam the park in search of wildlife.

On a game drive in this park one is assured of spotting Zebra, Buffalo, Impala, Warthog and Waterbuck.  Also available sometimes in large herds of over 100 are elands however they are quite shy. Recently introduced Giraffes are also sometimes encountered.

An alternative view of the park, hopefully including sightings of animals rarely seen during the day, is provided by guided night drives. These start between 6:30pm-7:00pm and last two to three hours, escorted by a ranger guide. There are great chances to see nocturnal animals such as bushbabys, pottos and perhaps even a leopard. 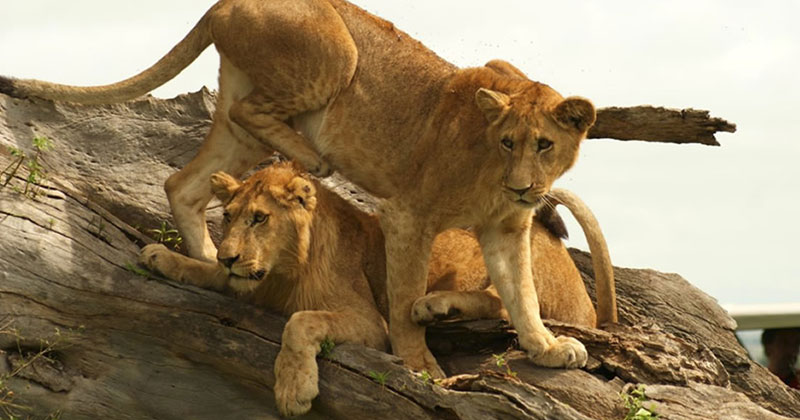 For game drives in this park, it is advisable to move with a park ranger who will help you spot the lions that may be sitting on the valley’s various rocks. Other wildlife includes elephants, leopard, bush duiker, jackal, bushbuck, bush pig, ostrich, buffalo and much more, in the wild Narus Valley.

Wildlife is most active in the Narus Valley during early mornings and late afternoon. 6am and 4pm are optimum times to set off on game drives.

The southerly Narus Valley contains the park’s only permanent water points and wildlife congregates in this area for much of the year. Look for buffalo and elephant in the swamps along the valley floor, giraffe and eland on the drier slopes above and scan the rock outcrops for lions.

The dry Kidepo Valley is short on big game but massive on scenery. The hour-long drive to Kanangorok Hot Springs passes some magnificent landscapes. 30 kilometers north of the park’s tourism hub at Apoka, the road crosses the dry, sandy bed of the Kidepo River to enter an expansive plain lined to the east by the Morungule mountain range and to the north by the looming, 2975m high Jebel Lotuke in South Sudan. Mammals are rare in this area but ostriches and secretary birds are often seen.