Are you planning on going on a wildlife safari? Please, note that no amount of watching Animal Planet or the Discovery Chanel is going to get you ready for actual wild encounters! Although going on a safari in Africa features on almost every wilderness lover’s wishlist, there are a few precautions and preventive steps that one needs to take to be in proximity to the wild animals.

While on safari, you will enjoy the attention and input of one or more guides whose job is to make sure that you have a safe, fun and enlightening experience. Although you will be in capable hands, the more you know before setting off, the more you will get out of your adventure.

Background reading is perhaps the most important, although speaking to somebody who has been to the area you intend to visit can be invaluable.

Your desire to visit Uganda or any other wildlife destination country may well have been triggered by National Geographic documentaries or Animal Planet. This is all very well, but you should not expect to see everything in the way in which these films depict. The best wildlife films take years to create, and involve weeks or months of waiting for action to happen. Part of enjoying your safari is having a realistic expectation, and you should always remember that wildlife is just that, it’s wild! With the exception of the most common birds and herbivorous mammals, nothing can be guaranteed on safari and that, really, is the thrill of it. It is the anticipation and chance that makes getting up early each morning, and driving around each bend in the road, so enthralling.

John Enjoys A cultural Dance a Bawa Community in Bwindi

It is vital to develop a good relationship with your guide from the outset. Bear in mind that he or she will not only know the area and its wildlife, but also the best ways to reveal this to you. Make sure that you state your expectations clearly from the word go, and don’t be shy to get involved in each days routine. If you have seen enough lions for one day, for example, let your guide know that you would like to focus on seeing other species.

Rather than spending your whole safari charging about looking only for big game, aim to get an understanding and appreciation for the whole ecosystem, of which termites and fig trees play as big a role as elephants and lions. Developing an interest in birds, reptiles and trees means that you’ll have a captivating experience at all times.

Sensitivity toward wildlife is paramount. Your guide will know the correct distance to approach each individual species without causing stress, but in the rare instances where this may not be so, it is up to you to dictate the distance. The most enthralling wildlife encounters are often those in which the animals that you are viewing are unaware or unafraid.

Being on safari generally puts you at less risk than you would be when traveling on busy roads in your own neighborhood, but many animals are potentially dangerous and some simple precautions are advisable. A good guide will naturally avert any risky situations, but as already mentioned, respecting animal’s space by not attempting to get too close is paramount. Almost all large mammals are frightened of humans, and generally run or move off when confronted with the upright form of a person. This can never be taken for granted, however, and you should not be tempted to leave the safety of a safari vehicle to approach an animal. It is equally important to remain seated while in open safari vehicles, because lions, for example, appear to regard safari vehicles as one entity, rather than a collection of edible primates! Many of the best wildlife lodges are not fenced and allow free movement of all wildlife, so you can expect to be escorted to and from your room or tent after dinner by an armed guard. Most large mammals may explore lodge surroundings after dark, but typically keep well clear during daylight hours. Exceptions include elephant, impala, bushbuck and some other herbivores which realize that the lodge offers protection from predators. Opportunistic vervet monkeys, and sometimes baboons, frequently raid kitchens and table fruit. Monkeys can become aggressive once they are accustomed to handouts, so the golden rule is to never feed them, or any other animal. 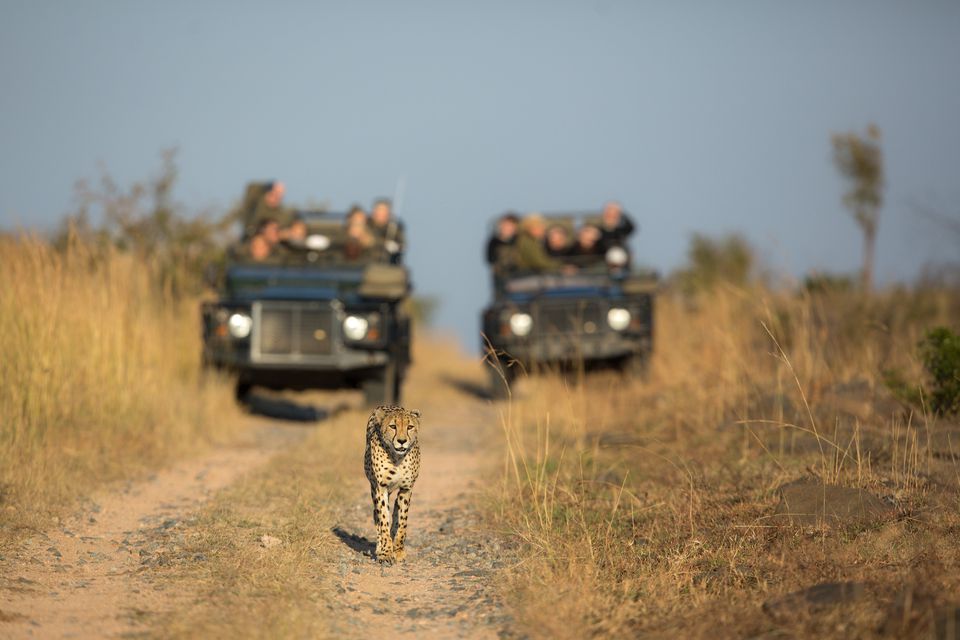 Naturally, most people will want a record of their safari, so follow our tips on Photography.

Carry your valuables with you or put them in a room safe or safety deposit box at your lodge or hotel.

Do not call out to a person, signaling with an index finger. This is insulting to most Africans. Instead, use four fingers with your palm facing downward.

During daytime Wildlife game viewing safari activities, wear colors that blend in with your surroundings (brown, tan, light green or khaki). Do not wear perfume or cologne while game viewing. Wildlife can detect unnatural smells for miles and unnatural colors for hundreds of yards (meters), making close approaches difficult.

The very few tourists who get hurt on safari are almost always those travelers who ignore the laws of nature and most probably the advice and warnings of their guides. Common sense is the rule.

Do not wade or swim in rivers, lakes or streams unless you know for certain they are free of crocodiles, hippos and bilharzia (a snail-borne disease). Fast-moving areas of rivers are often free of bilharzia, but can still be a bit risky. Bilharzia, fortunately, is not the dreaded disease that it once was; if detected early it can be easily cured.

Do not walk along the banks of rivers near dawn, dusk or at night. Those who do so may inadvertently cut off a hippo path to its waterhole, and the hippo may charge.

Do not walk close to the edge of a river or lake due to the danger of crocodiles.

Malaria is present in almost all the parks and reserves covered in this guide. Malarial prophylaxis (pills) should be taken and must be prescribed by a physician in your home country but are available without prescription in many countries. Because most malaria-carrying mosquitoes come out from dusk until dawn, during this period you should use mosquito repellent and wear long pants and a long-sleeve shirt or blouse, shoes (not sandals) and socks.

Because of the abundance of thorns and sharp twigs, wear closed-toed shoes or boots at night and also during the day if venturing out into the bush. Bring a flashlight and always have it with you at night.

Don’t venture out of your lodge or camp without your guide, especially at night, dawn or dusk. Remember that wildlife is not confined to the parks and reserves in many countries, and, in fact, roams freely in and around many camps and lodges.

Resist the temptation to jog or walk alone in national parks, reserves or other areas where wildlife exists. To lion and other carnivores, we are just meat like any other animal.

Enjoy your trip while in Uganda. For any clarification, please contact us – call or email us!!!