The People, Settlements and Tribes in Uganda

The People, Settlements and Tribes in Uganda

Uganda was formed by the British between the years 1890 and 1926. The name Uganda was derived from the ancient Buganda Kingdom.There are over 56 tribes in Uganda.some of them wre migrated from other country and some of them are originated from them.

The country lies entirely between the arms of the Eastern and Western Great Rift Valleys of East Africa. It is bordered by the Democratic Republic of Congo (DRC) to the west, South Sudan to the North, Kenya to the East and Tanzania and Rwanda to the South.

The earliest inhabitants of Uganda were the Stone Age People, who were gradually absorbed or replaced in the first millennium A.D. by the incoming agriculturists and pastoralists.

Between A.D. 500 and 1,500, other people began to migrate to Uganda from different parts of Africa. At the time of the coming of the British, there were over fifty ethnic and cultural groups in Uganda. These ethnic communities could conveniently be divided into four broad linguistic categories namely; the Bantu, the Luo, the Atekerin and the Sudanic.

The second category is the Atekerin people, also referred to as the Para-Nilotics or the Nilo- Hamites. The group is found mainly in the north, the east and north-eastern Uganda. The group constitutes the Langi, the Karamajong, the Iteso, the Kakwa, and the Kumam. They trace their origins to Ethiopia and are said to have been one people. The Langi are unique in that they lost their Ateker language and culture and spoke Luo.

The third group is the Luos, an extensive family that spread all over East Africa. These tribes in uganda  include the Alur, the Acholi, and the Japadhola. The Alur are settled in Westin Nile, Acholi in Northern Uganda and Japadhola in Eastern Uganda.

The Sudanic are speakers of West Nile, comprising of the Madi, the Lugbara, the Okebu, the Bari, and the Metu. They trace their origin to Sudan but their cultures and language indicate that they have become completely detached from their places of origin.

Some Facts And Figures

For the complete tribes in Uganda, see table below: 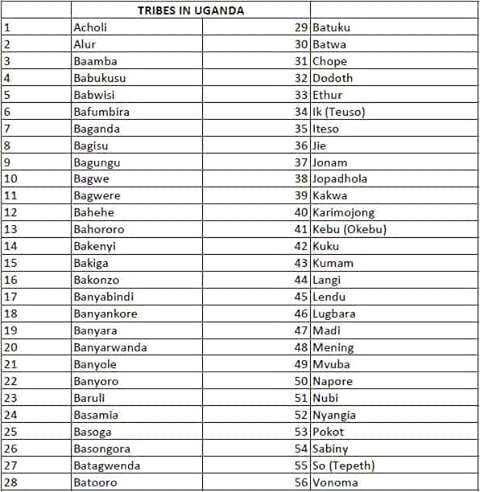