This event (Kabaka’s birthday) which is celebrated annually attracted thousands of his subjects who who lined up along Kampala-Masaka highway dancing, drumming and singing Buganda kingdom praise songs.

Similar events like these can be enjoyed when you choose to travel with Saso Uganda Safaris. They offer packages such as;

After entering Masaka, the Kabaka made several stop overs at Lukaya, Mukoko, Butende, Nyendo, Kyabakuza among other towns where his subjects had gathered. In some areas, he had to disembark his car, move on foot waving at people amid pomp. 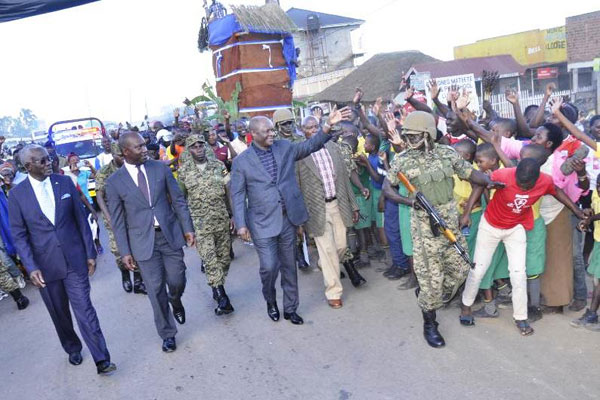 At Buddu-Mawokota (Kalungu-Mpigi) boarder, the Kabaka was received by the third deputy Katikkiro in the Buganda Kingdom, Apollo Makubuya and the kingdom’s Minister for Culture, Heritage, Royal Tombs and Tourism, Denis Walusimbi Ssengendo.

The Kabaka reached Villa Maria at 10am, planted a memorial tree at the venue before going for a guided tour around the church which is said to be one of the oldest in Uganda.

After the tour, the Masaka diocesan bishop John Baptist Kaggwa led the congregation in a Mass after which the Kabaka gave a speech and later served his subjects a birthday cake which climaxed the week- long celebrations (Kabaka’s birthday) that begun with Kabaka’s Birthday Run last Sunday in Kampala and other towns in Uganda and diaspora.

Kabaka Mutebi was born on April 13, 1955 to Kabaka Edward Fredrick Muteesa II and Nabakyala Sarah Nalule at Mulago Hospital and spent his early years in Mengo palace. He was later taken to Masaka and the UK in 1967 when President Obote abolished the kingdoms.

He stayed in the diaspora until his father’s remains were returned for burial in 1972.
Kabaka Mutebi attended school at North Polytechnic, Bradfield College and Cambridge University. He once practiced journalism and marketing between 1970 and 1980.

On July 31, 1993 when the kingdoms were reinstated by NRM government under President Museveni, Mutebi was consecrated as King.
On August 27, 1997, he got married to Sylvia Nagginda.

With safari companies like SASO Uganda safaris, expect to see more of these when you visit Uganda. Contact us now for more information.