Uganda is diverse in cultural heritage: Drum and dance in Buganda

Uganda has a very strong, cultural heritage. Many regions in Uganda have kingdoms including Buganda, Busoga, Bunyoro and Toro. As we earlier mentioned, the Uganda culture is made up of a diverse range of ethnic groups with over 50 African ethnic groups, a small population of Europeans, Asians and Arabian people. According to the 2014 Uganda Population and Housing Census, approximately two-thirds of the population is Christian and the other third are Muslims and followers of traditional African religions. There are several languages spoken in Uganda, but the main languages are English (official), Bantu languages, Nilotic languages and Swahili.

In Uganda, different ethnic groups have come up with their dressing styles in an effort to identify themselves from others; the cultural dress code is diverse, but “Kanzu” is the national dress of men, while in central and eastern Uganda, women wear “gomesi”, a dress with a sash tied around the waist and large exaggerated shoulders. Women from the west, northwestern drape a long cloth around their waists and shoulders called suuka. Women from the southwest wear a long, baggy skirt and tie a short matching cloth across their shoulders.

Women also wear a floor long dress called a busuti which was introduced by the 19th-century missionaries. 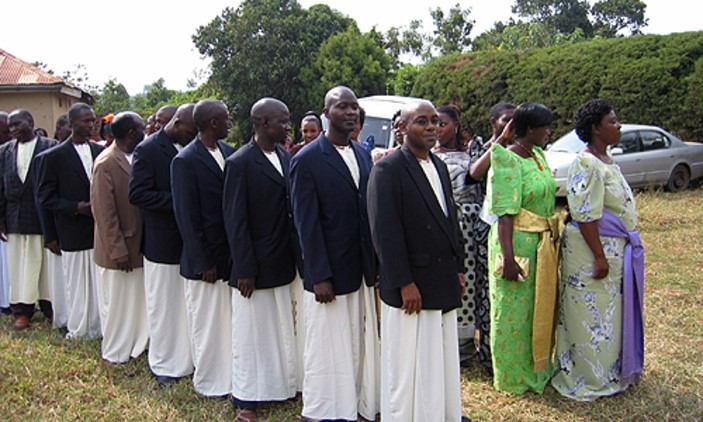 Women putting on gomesis and men on Kanzus during a traditional ceremony.

Music is a culture and source of informal education in Uganda. Important messages and ideas are communicated through dance and drama. Each ethnic group has its musical history; songs are passed down from generation to generation. Ndigindi and entongoli (lyres), ennanga (harp), amadinda (xylophone) and lukeme (lamellophone “thumb piano”) are commonly played instruments. The Drum being the common instrument in Africa, also dominates Uganda in symbolism to African culture. A drum is made from animal skin of Cows, goats, and other animals. In addition to entertainment, the drum is used as a tool for sending particular messages to the intended audience e.g. the use of drums for the last funeral rites, traditional worship, king installation, exorcism, circumcision among others.  Different drumming techniques are used by each tribe in Uganda. Uganda’s different peoples have their own special dances; The banyankole perform their Kitagururo dance, the Banyoro have their Runyege, Acholi have the Bwora and Otole dances. The Alur have the traditional Agwal dance, Bagisu have the Imbalu dance during circumcision ceremonies. 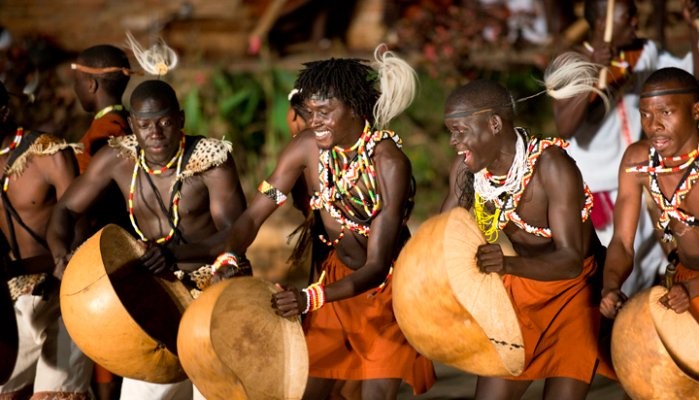 Additionally, the cultures and traditions are also expressed through a wide range of arts and Crafts made from wood, Papyrus reeds and local material. These include black smith implements, beaded Jewelry, wood carvings and batiks. They can be found all over the city in village bazaars, gift shops, hotels, Urban galleries and the National Theatre Craft Market. While on your Uganda travel or safari, consider taking on a cultural tour to the known destinations. Among the Cultural Sites in Uganda include the Buganda Royal Tomb, and other Cultural Sites.

For more information on cultural tourism, please contact us. We shall give you experiences on;