Uganda is arguably the most attractive country in Africa to bird watchers not only to because of the unusually number of species recorded within its borders, but also because Birding Safaris Uganda offers easy access to several bird-rich habitats that are difficult to reach elsewhere. Uganda’s remarkable avian diversity-1,008 species recorded in an area similar to that of Great Britain can be attributed to its location at a transitional point between the East African savanna, the West African rainforest and the semi-desert of the north.

The key to Uganda Safaris diversity is its variety of habitats: arid semi-dessert, rich savannahs, lowland and montane rainforests, vast wetlands, volcanoes and an Afro-alpine zone. Uganda covers an altitude from 650 to 5000m.

Analytical of Uganda’s intermediary position is the fact that only one bird is endemic to the country, the rather ordinary Fox’s weaver. However, if you take only East Africa into consideration, then approximately 150 bird species (more than 10% of the regional checklists) are found only in Uganda. Uganda Birding Safaris list includes seven of the 20 horn-bill species recorded in the region, five out of 14 honey guides, seven out of 20 hornbill species recorded in the region, five out of 20 bush family as well as 13 members of the thrush family, 11 warblers, ten flycatchers, eight sun birds, eight weavers, eight finches, four tinker birds, four pigeons, 3 kingfishers, 3 sparrow hawks, 3 cuckoos and 3 nightjars.

Most of these Uganda’s specials are West African and Congolese forest birds that should be very difficult to see elsewhere for the simple reason that the other countries in which they occur are poorly developed for Tourism. The rain forests of Western Uganda must be seen as the country’s most important bird habitat, and that is the greatest interest to bird watchers (bird watching), particularly if they are already familiar with typical East African birds. The most alluring forests in Uganda with localized species is Semliki, Budongo Forest, Kibale Forest and Bwindi Forest. However, Kibale is the Uganda’s spot for forest birds and the nearby Magombe swamp. Even the relatively tame botanical gardens in Entebbe will throw up several interesting species.

Therefore you want to see or watch a wide range of birds in Uganda for tour enthusiasts, try to visit Entebbe (water and forest birds), Lake Mburo (water and acacia associated birds), Queen Elizabeth (Over 600 species are recorded), Murchison Falls (a best place in East Africa to see the Papyrus-associated shoe-bill) and Kidepo (over 50 raptors recorded). 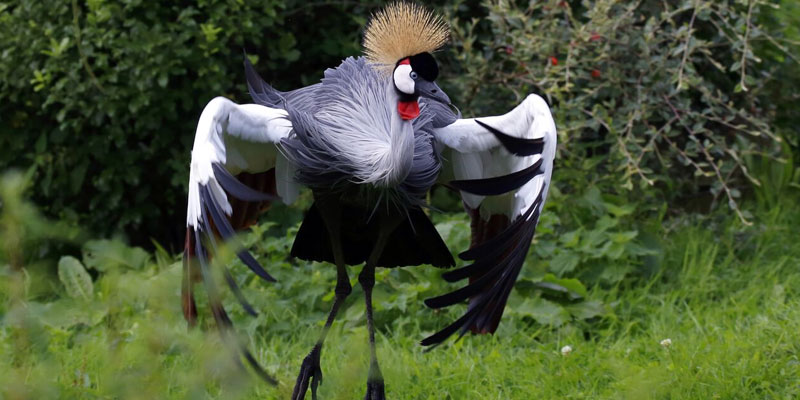 Classified as an Important Birding Area (IBA) by Birding International, Queen’s great variety of habitats mean it is home to over 600 species. This is the greatest of any East African national park and a phenomenal number for such a small area. The park’s confluence of savanna and forest, linking to the expansive forests of the DR Congo allow visitors to spot East as well as Central African species. 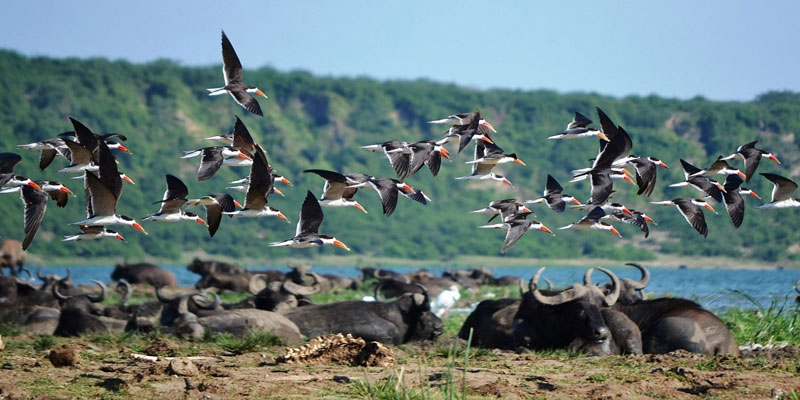 Both the game drives and the launch trips offer an opportunity for one to come across distinct birdlife, including savannah forest birds, water birds and Albertine Rift endemics. The park’s main birding attraction is the Shoebill, best sighted in the dry season from January-March.

Closer to the river where there are more thickets and woodlands, the commonest bird varieties include the Swallow-tailed and Red-throated Bee-eaters – particularly in the Nyamusika Cliffs; Woodland, Pied, Giant and Malachite Kingfishers; Francolin; Hornbills, Grey heron; Hamerkop; Shrikes; Flycatchers; Cuckoos; Woodpeckers; Crombecs and Warblers. The riverbanks are also home to ducks, geese, stilts and plovers.

The park’s main birding attraction is the Shoebill, best sighted in the dry season from January-March. 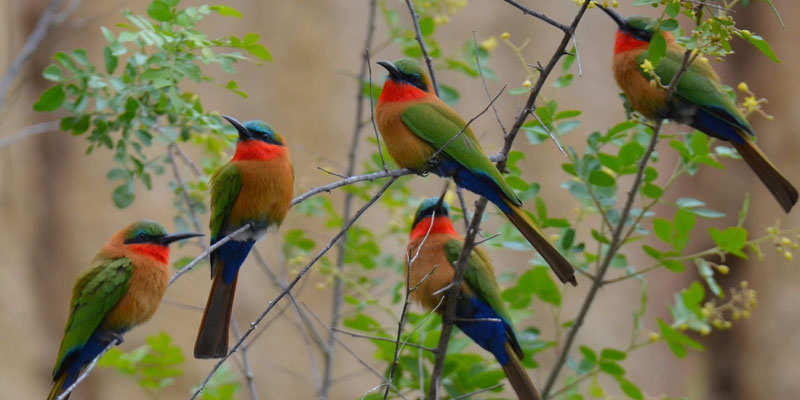 Bwindi a varied habitat which is Uganda’s oldest forest mean it is the ideal home for a variety of birds, with 350 species recorded, including 23 endemics (90% of all Albertine Rift endemics) such as the Short-tailed Warbler and Blue-headed Sunbird as well as seven IUCN red data listed species. Easy to see are the African Emerald Cuckoo, Common Bulbul, African Blue and White-tailed Blue Flycatchers and Red-headed Bluebill.

Birding takes place along the main trail, the Buhoma Waterfall Trail and along the bamboo zone and Mubwindi Swamp trail in Ruhija 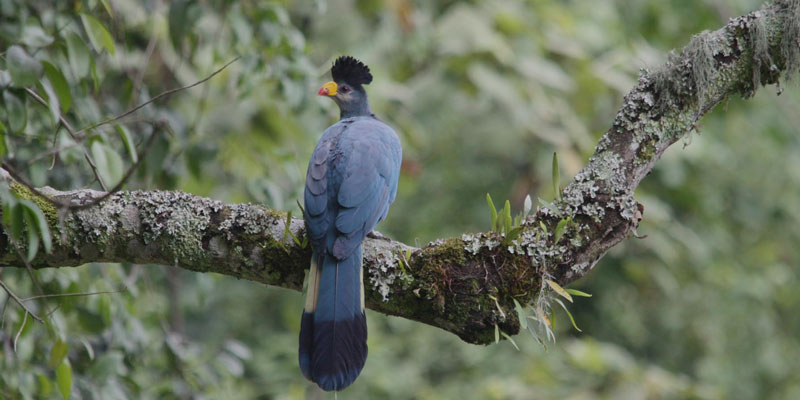 Birders who make it to Semuliki will be rewarded with some of Africa’s best forest birding. Sempaya and Ntandi provide excellent viewing of the birds including the White-crested Hornbill, Red-billed Dwarf Hornbill, Piping Hornbill, Yellow-throated Nicator, Great blue and Ross’s Turacos. The area around Kirumia River is another top birding spot. The shoebill stork is regularly seen at close quarters on Lake Albert and forest walks are good for tracking water birds. 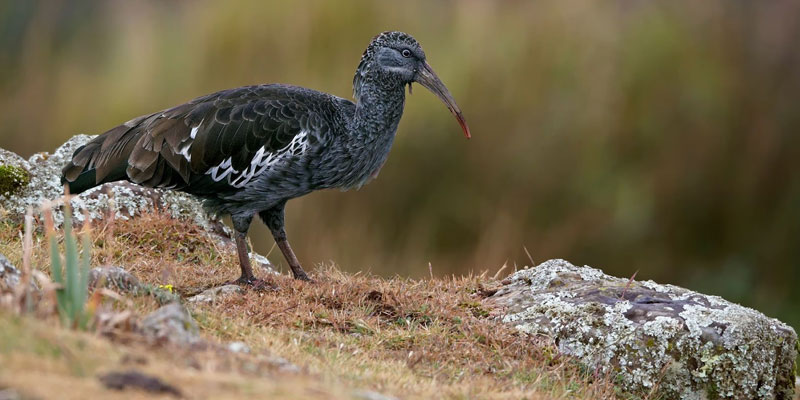 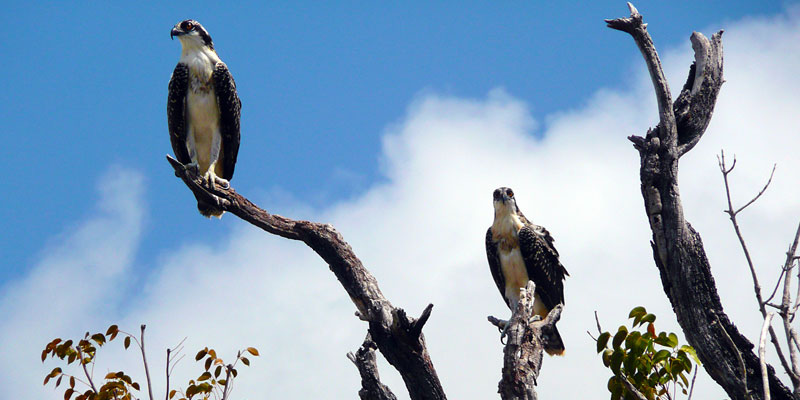 Lake Mburo’s key birding spots include swampy valleys and viewing platforms near the salt licks and in the forest. Species found at these locations include the Rufous-bellied Heron, Bateleur, Coqui Francolin, Grey Crowned Crane, Black-bellied Bustard and Brown-chested Lapwing.

Rubanga Forest can be visited using a vehicle or on foot. This is a real draw for keen birders, and prior arrangement should be made with the warden. The rare Red-faced Barbet – only seen in Lake Mburo National Park – is one of the of the forest’s featured species. 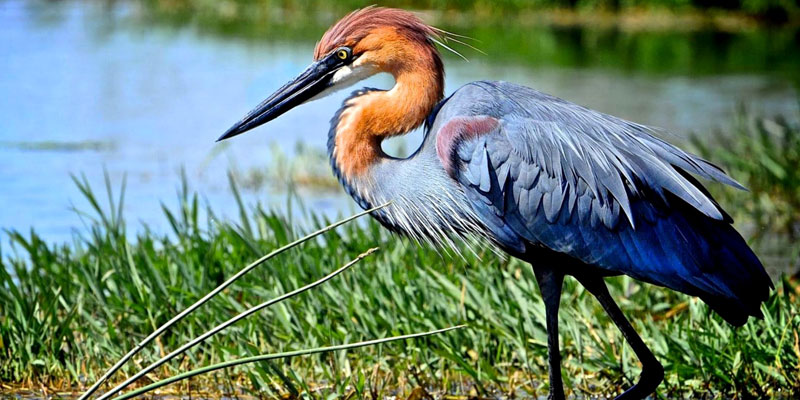 The best birding in Mgahinga also takes in some of its most beautiful scenery – in the gorge between Mts Gahinga and Sabinyo, through the bamboo forest, and in the montane forest, where the beautiful Rwenzori Turaco may be observed.

Other good birding areas are at the bamboo belt at about 2,500m above sea level, and the tall montane forest at 2,660m. The Rwenzori Turaco is mostly sighted at around 2,700m. Along the Uganda-Congo border and on level ground, the Chubb’s Cisticola, Red-faced Woodland Warbler, Banded Prinia and Doherty’s Bush-shrike are vocal yet inconspicuous inhabitants of the tangled vegetation at the forest’s edge. 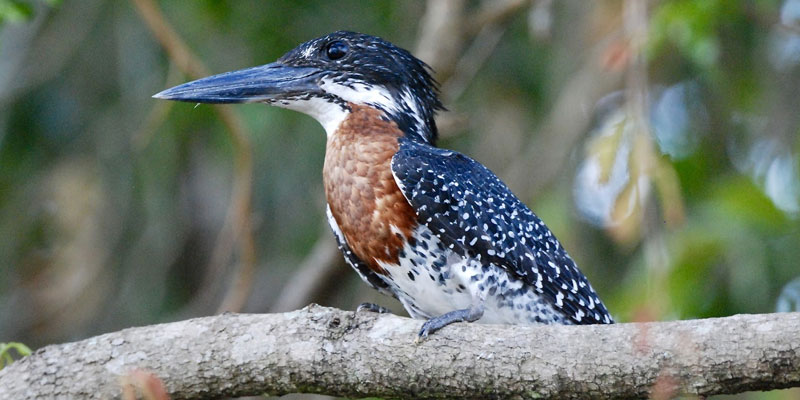 Bird watching tours start at 7am at kanyanchu. Bigodi wetland sanctuary, located just outside the park, is home to 138 bird species which may be seen during guided walks along the boardwalk trail and viewing platforms.

You are advised to book in advance. Rare species include the Papyrus Gonolek, White-winged Warbler, White-collared Oliveback and Papyrus Canary. 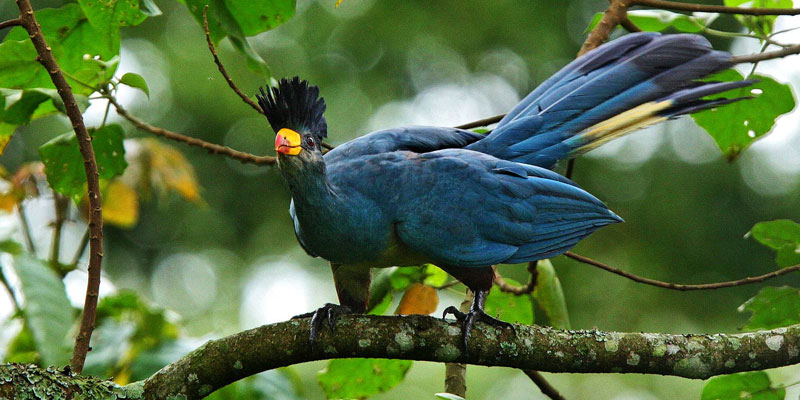 Bird Watching In Uganda opportunities are greatest in the montane forest. Bee-eaters, robins, sunbirds and barbets are some of the 217 species found in Rwenzori Mountains National Park.

It’s understandably, few species choose to make their home in the inhospitable world of the high Rwenzori. Bee-eaters, Robins, Sunbirds and Barbets are some of the 217 species found in Rwenzori Mountains National Park. Other species to watch out for include the Rwenzori Turaco and Long-eared Owl; while higher up on the slopes, Bearded Vultures, Swifts and Black Eagles may be seen circling for prey. 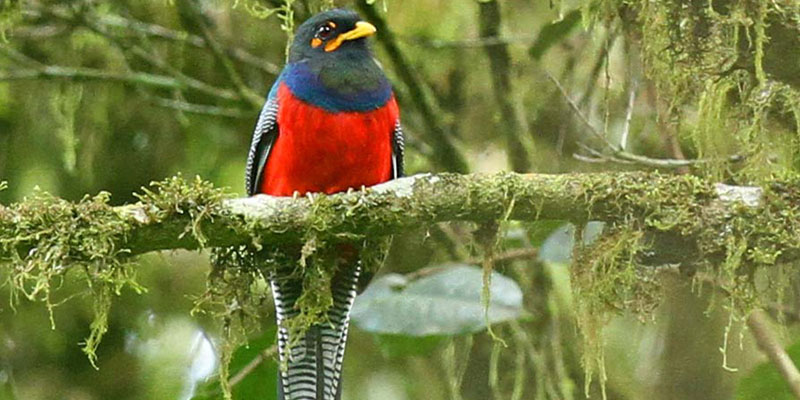 Apoka Rest Camp is a great spot to begin your Kidepo birding experience. Birding can also be done on the fringes of the Narus and Namamukweny Valleys.

Apoka Rest Camp is a great spot to begin your Kidepo birding experience. Birding can also be done on the fringes of the Narus and Namamukweny Valleys. Among the birds seen are the Abyssinian Roller, Purple Heron, Abyssinian Ground Hornbill and Clapperton’s Francolin, which is found only in Kidepo. The activity can be arranged both in the morning and evening. 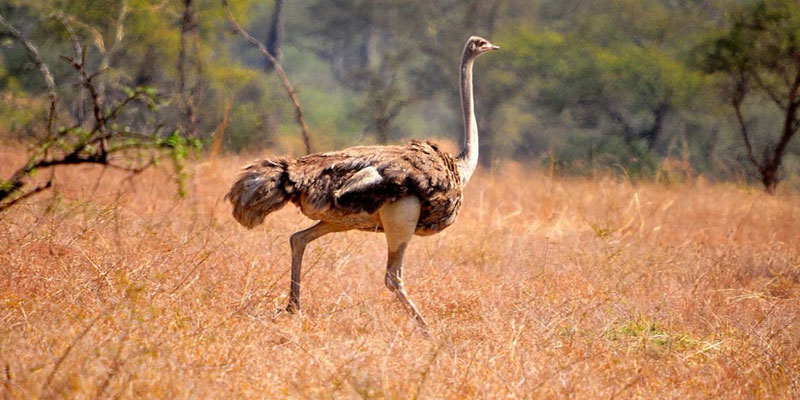 Mabamba swamp is located on the fringes of Lake Victoria towards western Uganda. The Shoebill is known to occur in mainly four countries i.e. Uganda, Rwanda, South Sudan and Zambia but it is best seen at Mabamba swamp.  You can access Mabamba wetland from either Kampala by car or Entebbe by boat. The drive to Mabamba from Entebbe or Kampala takes approximately one hour depending on the number of stops birding. You need to leave your hotel really early to beat the traffic and also before the heat from the sun is too much which reduces bird activity. You can access the swamp by boat on from Entebbe, once you arrive you leave the speed boat and join the canoe to access the possible location of the shoebill. 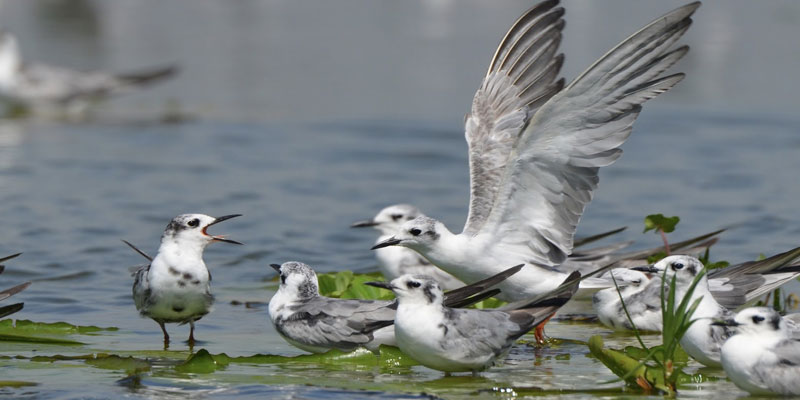 For the best Uganda Birding Safari experience, Saso Uganda Safaris is the best tour operator in Uganda organizing affordable Uganda Safari Tours in different destinations. Our Uganda Travel Tips that we provide is well articulated and you won’t miss any necessary things or equipment in your trip.

Our tour has a wide range of Uganda Accommodation either you would like to go camping, or on classic lodges, Saso Uganda Safaris will ensure that you African safari is memorable and unforgettable.

Impressed? Want to know more? Contact Us today for any inquiries or bookings to our Uganda Safari Packages!